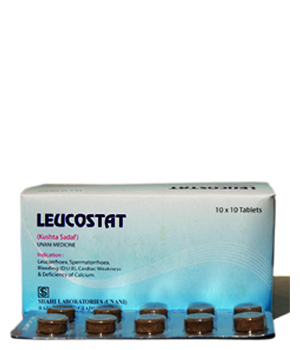 Leucostat is an ideal medicine used in leucorrhoea, Physical and mental weakness. Its main ingredient is Oysters, naturally formed. It contains natural calcium carbonate and zinc sulphate. Supplement of zinc increases the immune system of human body and it works against bacteria by enhancing the Leucocytic activity of blood against micro-organism.

DUB occurs when there is an imbalance of female sexual hormones. Zinc has a capacity to balance the hormones thus curing DUB and control the irregular menstruation. Zinc helps to form insulin, which helps to increase appetite, remove excessive fat and control blood glucose level.

Also Zinc aids in the treatment of infertility of human body. Elderly women specially who has menopause, zinc helps to delay the menopause.

Zinc has a capacity to govern the contractibility of muscles, in this way; it acts on flaccid mammary gland which strengthens the muscles of the female breast. Ultimately the breast becomes well-shaped.

If face is badly blemished zinc is the excellent therapy and also it has a capacity in the growth and repairmen of injured tissues. Another feature of zinc is to promote mental alertness and aids in proper brain function.

Beside this, Leucostat contains glutathione, that acts as a powerful antioxidant which inhibits the formation of free radicals and retards aging process.

Leucorrhoea: One tab thrice daily for 15 days after meal.

Infertility: Initially one tab twice daily for 1 month after meal.

Antioxidant: Initially one tab twice daily for 2 weeks after meal.

The above schedule dosage may be changed as directed by the physician.

No hormonal ingredients or artificial color present in Leucostat. So it can be easily used in pregnant women, lactating mother and menstrual cycle.

No side effects yet been reported.

No interaction with any other drugs yet been reported.

Keep in cool and dry place, away from light & children.